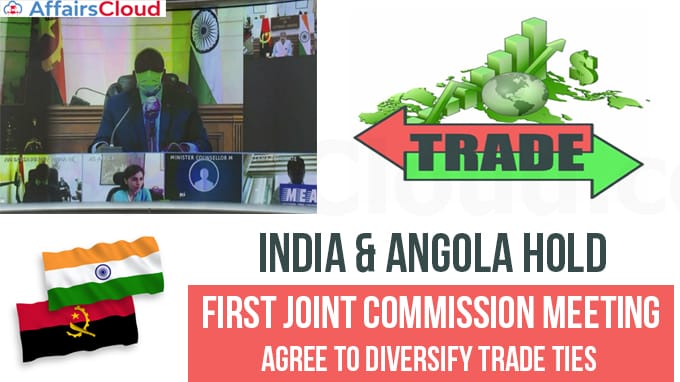 The session was co-chaired by Dr. Subrahmanyam Jaishankar, External Affairs Minister of India, and  Ambassador Téte António, Minister of External Relations of the Republic of Angola.There were 3 pacts signed between India and Angola.

i.Review was made by the 2 ministers on the bilateral relations in the areas of political, economic, trade and investment, defence and security and development cooperation.

ii.Both sides have also agreed to enhance Indian investment in IT( Information Technologies) and telecommunications and to cooperate in the field of space in order to benefit the Angolan health and education sectors.

i.Agreement to exempt visa for holders of diplomatic, official and service passports.

ii.Memorandum of Understanding(MoU) to cooperate in the field of Health.

iii.MoU for cooperation between the Ministry of External Relations of Angola and Sushma Swaraj Institute of Foreign Service.

Angola-India development can be Strengthened

The commission noted that Angola-India development partnership can be further reinforced through lines of credit and buyer’s credit arrangements to increase the  capacity of Angolan entities in areas such as energy, industry and sustainable water projects among others.

Note- The 2nd session of the Angola-India Joint Commission will be held in New Delhi in 2022 on a mutually convenient date.

i.On August 25, 2020, the 17th meeting of the India-Vietnam Joint Commission on Trade, Economic, Scientific andTechnological Cooperation was held virtually which was co-chaired by India’s External Affairs Minister Subrahmanyam Jaishankar and his Vietnamese counterpart Pham Binh Minh. 2 MoUs were inked during the meet