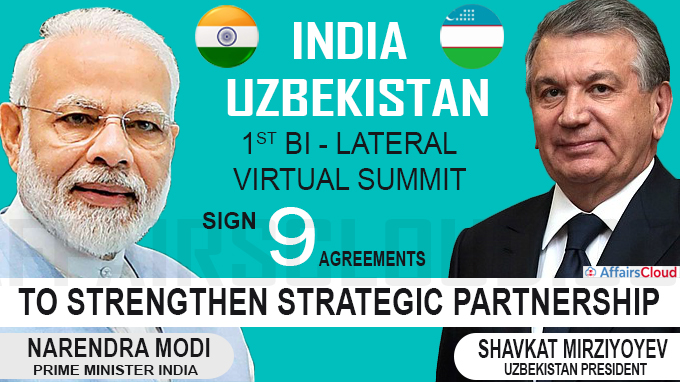 On December 11, 2020 the first bilateral virtual summit between India and Uzbekistan was co-chaired by Prime Minister (PM) Narendra Modi and President of the Republic of Uzbekistan Shavkat Miromonovich Mirziyoyev to discuss the entire gamut of bilateral relationship, including strengthening India-Uzbekistan cooperation in the post-COVID-19 world between both nations. Both sides also exchanged views on regional and global issues of mutual interest.

During the summit both sides signed the 9 following Agreements/ Memorandum of Cooperation (MoC)/Memorandum of Understanding (MoU):

Following the summit, a joint statement on close friendship and strong partnership between Uzbekistan and India was also adopted.

–Both nations have set a target to boost USD 1 billion for bilateral trade in the next few years.

— Indian side confirmed the approval of USD 448 million of Line of Credit (LoC) for four developmental projects in Uzbekistan in the fields of road construction, sewerage treatment and information technology.

–The leaders instructed their officials to fast-track the conclusion of the ongoing Joint Feasibility Study for the commencement of negotiations on a Preferential Trade Agreement.

—Both nations agreed to work towards an early conclusion of the Bilateral Investment Treaty for further improvement of trade and economic cooperation.

— India and Uzbekistan expressed their unanimity in their support for a united, sovereign and democratic Islamic Republic of Afghanistan.

–The free economic zones of the two countries provide great investing opportunities, including the Uzbek-Indian free pharmaceutical zone in the Andijan region of Uzbekistan.

–Both nations will work toward the enhancement of business cooperation through the established institutional mechanism of the Uzbekistan-India Business Council run by the Confederation of Indian Industry (CII) and the Chamber of Commerce & Industry of Uzbekistan (Uz-CCI).

–The leaders agreed to strengthen mutual cooperation in the field of science, technologies and innovation.

–There will be further strengthening of cooperation between the law enforcement agencies and special services under the framework of the Uzbekistan-India Joint Working Group on Counter-Terrorism.

–There will also be an enhancement of bilateral civil nuclear cooperation as part of an agreement between the Global Centre for Nuclear Energy Partnership, India and the Agency for Development of Nuclear Energy, Uzbekistan.

— Both sides decided to explore connectivity routes through International North-South Transport Corridor (INSTC) and will also work upon to hold trilateral dialogue among India, Iran and Uzbekistan to promote connectivity through the Chabahar port.

–The Indian side offered customized scholarship opportunities provided by the Indian Council for Cultural Relations (ICCR) under the Indian Technical and Economic Cooperation (ITEC) programme.

–Uzbekistan reaffirmed its support to India’s candidature for permanent membership of the United Nations Security Council (UNSC) and congratulated India on its election as a non-permanent member of the UNSC for the term 2021-22.

— The Uzbek side thanked the Indian side for the deputation of an Indian expert to develop IT (Information Technology) Parks in Uzbekistan and establishment of an India Room in the Armed Forces Academy of Uzbekistan.

ii.On November 6, 2020, an India-Italy virtual summit was held which was co-chaired by India’s Prime Minister Narendra Modi and Prime Minister of Italy Prof. Giuseppe Conte. Both leaders reviewed the framework of bilateral relationship