On 22 January 2020, The 1st edition of Ganga-Volga Dialogue of Civilizations 2020 based on the theme “Connectivity”, between India & Russia was held in New Delhi.
The event was inaugurated by India’s Minister of State for External Affairs V. Muraleedharan & was organised by the Ministry of External Affairs(MEA) in association with Dr. Syama Prasad Mookerjee Research Foundation. 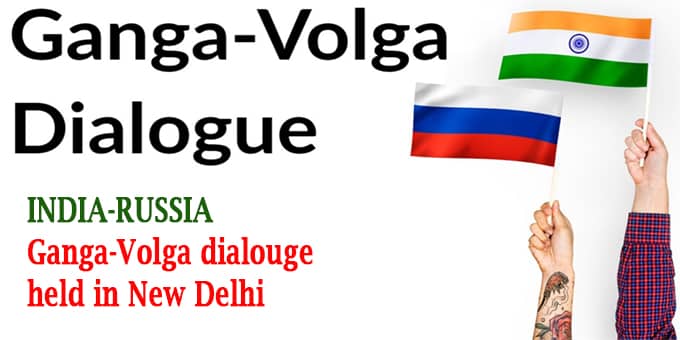 i.The dialogue aims to provide a platform for enhancing the special and privileged bilateral partnership between India & Russia.

ii.It saw the participation of 15 noted scholars from both the countries to exchange ideas on how to expand the areas of education, culture, economy, entrepreneurship, strategic thought, innovation, media, tourism, healthcare, manufacturing and technology among others.

iii.The idea of the Dialogue was conceptualized between Prime Minister (PM) of India, Narendra Modi & the President of Russian Federation, Vladimir Putin during India-Russia Summit held in October 2018.

iv.During the dialogue, India placed its state of not being into any military alliance in the Quad grouping, which play a key role for India to keep its trade & defence relations between Russia and the US balanced.
The relations between India and CSTO (Collective Security Treaty Organization) & decisions agreed to at the 20th India-Russia Summit 2019 held in Vladivostok, Russia in September 2019 such as utilization of the $1 billion LoC(Line of Credit) extended by India for development of Russia’s Far East by Indian companies were also discussed.

v.The recommendation of the Dialogue for the officials of both the nations was to institutionalize the process & hence this Dialogue will be a Track 1.5 platform for promoting bilateral partnership.