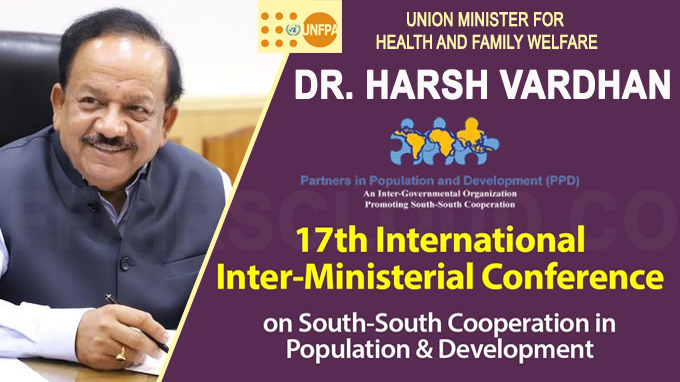 On December 8, 2020, the 17th International Inter-Ministerial Conference on South-South Cooperation in Population and Development titled “Nairobi Commitments and the 2030 Agenda: Taking stock and looking ahead to post COVID-19 Crisis” was held virtually.

The ministerial session for the same was held on “Promoting South-South Cooperation for Attaining Nairobi Commitments and the Agenda 2030” which was chaired by Dr. Faisal Sultan, The Federal Minister of the National Health Services, Regulations and Coordination of the Government of Pakistan.

During the session, Keynote Address was delivered by internationally acclaimed and outstanding leaders in health, population and development. The Indian side was represented by Union Minister Dr. Harsh Vardhan, Ministry of Health and Family Welfare (MoHFW). It should be noted that he is the Vice-Chair of the PPD Board.

–India reaffirmed its commitments made at the Nairobi Summit 2019 which include ending all maternal deaths, fulfilling unmet needs for family planning, reducing gender-based violence and ending harmful practices against women and girls by 2030.

–Under the Ayushman Bharat National Health Protection Scheme (AB-NHPS) or the Pradhan Mantri Jan Arogya Yojana (PMJAY), the government is providing health care coverage of US$7000 per family per year covering over 500 million Indians.

–The Central Government is also increasing the range of contraceptives and improving accessibility of family planning services through mass awareness campaigns, and counseling.

–For achieving the Sustainable Development Goal (SDG) target of reducing Maternal Mortality Rate to less than 70 by 2030, the govt has implemented “Surakshit Matritva Aashwasan (SUMAN)” which means Safe Motherhood Assurance.

–India is also dedicated towards providing quality, timely and disaggregated data, investing in digital health innovations, and improvement of data systems by 2030.

What are Nairobi Commitments?

In November 2019, Nairobi Summit on International Conference on Population and Development (ICPD) 25 was held in Nairobi, Kenya which resulted in more than 1,200 concrete commitments to help ensure sexual and reproductive health and rights for all by 2030.

What are Sustainable Development Goals?

About Partners in Population and Development (PPD):