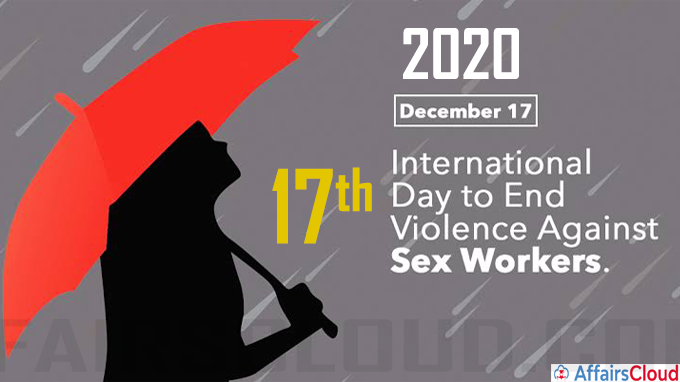 International Day to End Violence Against Sex Workers(IDEVASW) is annually observed across the globe on 17th December to remember the sex workers who lost their lives due to violence, marginalization and stigma encountered across the globe.

The 17th December 2020 marks the 17th annual observance of the International Day to End Violence Against Sex Workers.

To focus the global attention against hate crimes committed against Sex Workers across the globe.

The idea of the International Day to End Violence against Sex Workers was conceived by Annie Sprinkle, sex worker right activist, United States of America(USA) in 2003 and the day was started by the Sex Workers Outreach Project(SWOP), USA.

The day was first observed in 2003 as a memorial and vigil for the victims of the Green river killer in Seattle Washington.

i.As a part of the 17th IDEVASW and 12 days of action against violence, Stella, l’amie de Maimie, a Canadian social justice and community based organization, organised an anti-violence campaign: Nous sommes debouttes pour cesser la violence (We stand to stop the violence).

ii.The red umbrella is an important symbol for sex worker rights and is used for events that are held on December 17.