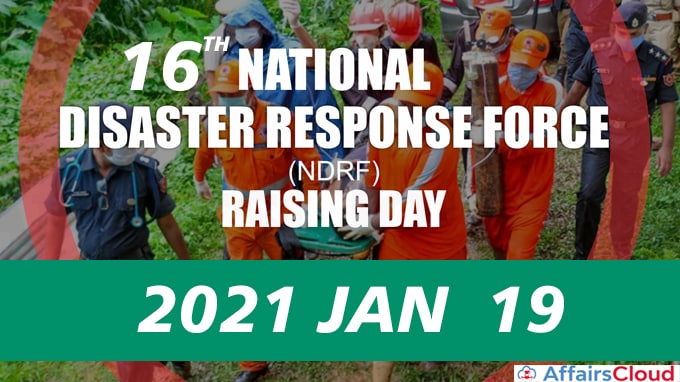 The National Disaster Response Force(NDRF) annually celebrates the NDRF Raising Day on 19th January to mark its formation in 2006. The 2021 marks the celebration of 16th NDRF Raising Day.

i.The successive natural calamities between 1990 and 2004 led to the enactment of Disaster Management Act on December 26, 2005, which has statutory provisions for the constitution of National Disaster Response Force (NDRF).

ii.The National Disaster Management Authority (NDMA) was constituted to lay down the policies, plans and guidelines for disaster management.

i.The NDMA is the parent body of the NDRF.

ii.NDRF has 12 battalions, 3 each from the Border Security Force (BSF) and Central Reserve Police Force (CRPF) and 2 each from Central Industrial Security Force (CISF), Indo Tibetan Border Police (ITBP) and Sashastra Seema Bal (SSB), in 12 different locations of the country and has more than 13000 personnels.

iii.The battalions of the NDRF have 18 self-contained specialist search and rescue teams.

i.The vital role of the NDRF in Disaster management and community awareness for Disaster Risk Reduction (DRR) in India.

ii.The NDRF personnels are trained in rope rescue, flood rescue, collapsed structure search and rescue and other activities to help the people during any calamities.

iii.They are a specialised task force for special response to disaster and calamities.

i.The personnels of the NDRF were deployed during the Odisha floods amid the COVID-19 pandemic.

ii.In a short span of time the NDRF has put together and sent the 6 tons of relief materials for the cyclone hit parts of Fiji.

iii.The NDRF Personnels were engaged to extinguish the wildfires in Dzukou Valley at the border of Manipur and Nagaland.

iv.The NDRF has saved more than 1 lakh lives during its 3100 operations and rescued more than 6.7 lakh people during the disaster.

The NDRF has inducted the first batch of 100 women disaster combatants and rescuers. This team was deployed to the banks of river Ganga in Garhmukteshwar Town, Hapur district of Uttar Pradesh.