The 14th edition of the Pravasi Bhartiya Divas (PBD) Convention 2017 kick started at Jacaranda Hall, BIEC, in Bengaluru, Karnataka on January 7 and would conclude on January 9, 2017.

The theme of the three day PBD 2017 was Redefining Engagement with the Indian Diaspora. 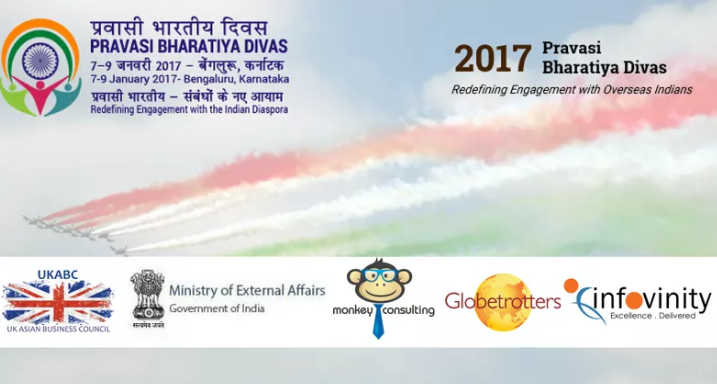 i.The PBD began on January 7 with the Youth Pravasi Bharatiya Divas. The theme of Youth PBD was ‘Role of Diaspora Youth in the Transformation of India’.

iii.Vice President of Suriname Michael Ashwin Adhin was the Special Guest at the Youth Pravasi Bharatiya Divas (PBD) who addressed the young overseas Indian delegates at the inaugural session along with Minister of External Affairs Smt Sushma Swaraj, Karnataka Chief Minister Siddaramaiah among others.

Plenary Session II: Start-ups and Innovations which had social impact in India

i.Addressing over 7,000-strong Indian Diaspora from various nations at the 14th edition of the Pravasi Bharatiya Divas, PM Modi launched a Pravasi Kaushal Vikas Yojana (PKVY) and also announced that he was taking steps to convert brain drain into brain gain.

i.Pravasi Kaushal Vikas Yojana PKVY aims to train and certify the Indians youths who are interested in overseas employment to enable them fit with the international standards and boost their confidence.

ii.The government would provide the skill development training irrespective of the vocation seleted by the youth.

i.PM Modi emphasized the contributions made by the Non-residential Indians and Persons of Indian Origin (PIOs) in the development of India and addressed the OCIs facing difficulty in getting the OCIs cards.

ii.The Government has set up special counters at immigration points to help in making OCI cards among which first such counters are been set up in Delhi and Bengaluru from January 1, 2017. PM encouraged all PIO Card holders to convert their PIO Cards to OCI (Overseas citizen of India) Cards.

iii.The deadline for PIO card conversions to OCI has also been extended from December 31, 2016, to June 30, 2017, without any penalty.

i.Pravasi Bharatiya Divas (PBD) was launched by the Vajpayee Government in 2003 which is celebrated since then every year on 9 January to mark the contribution of overseas Indian community in the development of India.

ii.It is celebrated on January 9 because it was on this day in 1915 that the greatest Pravasi, Mahatma Gandhi, returned to India from South Africa, and led India’s freedom struggle and changed the lives of Indians forever.

iii.The Pravasi Bharatiya Divas Convention provides a platform for interaction of the central and state governments with the Overseas Indian Community for mutually beneficial activities and a forum for discussing key issues concerning the Indian Diaspora.