At the G20 Summit, a consensus emerged on issues like fight against terror, global warming and protectionism among majority of the world leaders including Prime Minister Narendra Modi.

On July 8, 2017, the G20 nations, including India, pledged to strengthen health systems and also combat the menace of antimicrobial resistance (AMR), which the grouping termed as a “growing threat” to public health and economic growth.

On July 7, 2017, G20 leaders including Prime Minister Narendra Modi agreed to facilitate swift and targeted exchange of information between intelligence, law enforcement and judicial authorities to crackdown on the global scourge of terrorism and to check its funding sources.

On July 8, 2017, G20 leaders adopted a World Bank funding plan of up to USD 1 billion for women entrepreneurs in developing nations, an initiative championed by US President Donald Trump’s daughter Ivanka Trump.

At G20 Summit, Prime Minister Narendra Modi welcomed the action plan against terror and presented a 10-point action agenda for it.
PM Modi’s 10-point Action Plan
(i)Deterrent action against nations supporting terrorism must be made compulsory, such nations should be barred from G20 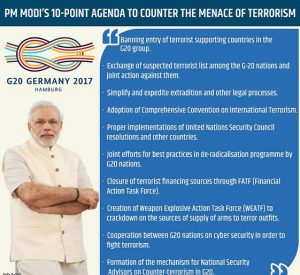 (ii)G20 nations must exchange lists of suspected terrorists and their supporters
(iii)Legal processes such as extradition should be simplified and expedited
(iv)Comprehensive Convention on International Terrorism should be adopted soon
(v)UNSC resolutions and other international processes should be effectively implemented
(vi)G20 nations should give emphasis to de-radicalisation programmes and exchange best practices
(vii)Terror financing should be curtailed by means of Financial Action Task Force (FATF) and other means
(viii)Weapons and Explosive Action Task Force (WEATF) should be constituted on lines of FATF so that source of weapons to the terrorists is stopped
(ix)G20 nations should cooperate in cyber security, with a focus on terrorist activities
(x)National Security Advisors on Counter Terrorism mechanism should be constituted

Formed in year 1999, G20 (Group of Twenty) is a political forum of industrialised and developing economies that deliberates upon range of global and regional issues which affects the global economy.