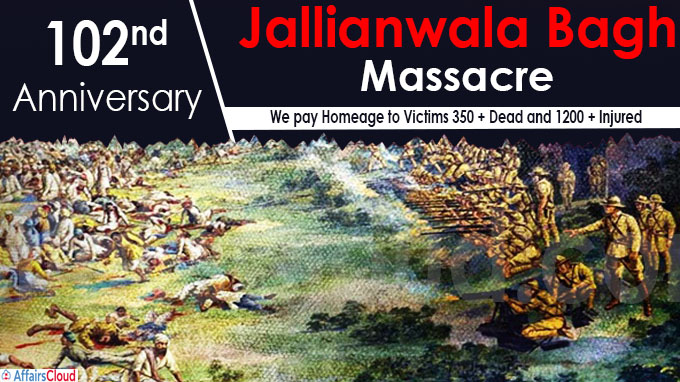 13th April 2021 marks the 102nd anniversary of the Jallianwala Bagh Massacre, which took place on 13th April 1919 in a public garden (Jallianwala Bagh) in Amritsar, Punjab. According to the records of the British Government around 400 people including men, women and children were killed and around 1200 were wounded in the Jallianwala Bagh massacre which is also known as the Amritsar Massacre.

i.On 13th April 1919,The British troop under the command of Brigadier-General Reginald Dyer had done the massacre on the crowd of unarmed protestors who were gathering to condemn the arrest of Satya Pal and Saifuddin Kitchlew.

ii. Following strong condemnation from Indian national leaders, the Government of British set up the Disorder Inquiry 7-member Committee under lord Hunter, a senator of the College of Justice of Scotland and criticized the acts of general Dyer, and sent him back to England.

i.After the Amritsar Massacre, Nobel Laureate Poet Rabindranath Tagore renounced his
Knighthood awarded by King George V in 1915.
ii.Mahatma Gandhi returned the Kaiser-I-Hind Gold Medal which was given to him for his
contribution during the Boer War.

i.The Jallianwala Bagh Memorial was established in 1951 by the Government of India to commemorate the Amritsar massacre.

ii.The book analyses the conclusion of the Hunter Commission, the debates in the London parliament and the impacts of the massacre on the freedom struggle.