On January 09,2020 24 states and union territories (UTs) have joined together to set up a total of 1,023 ‘fast-track special courts’ (FTSCs) to dispose of over 1.60 lakh cases of rape of children below the age of 12 years and women pending in various courts across the country. This has been done to bring out fast and time bound completion of trial of these cases for which Criminal Law (Amendment) Act, 2018 was enacted.
The FTSC will be set up as part of National Mission for Safety of Women (NMSW). 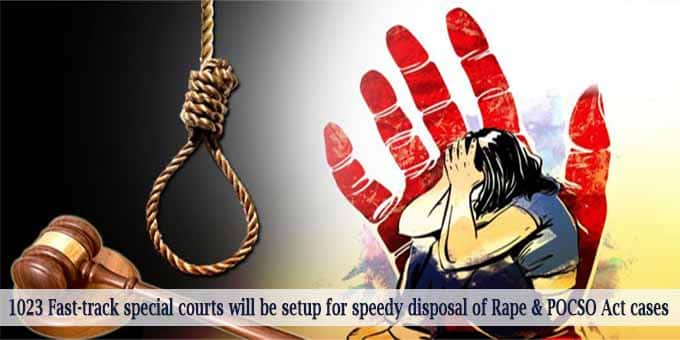 i.Proposal to WCD: Law and Justice Ministry had sent a proposal regarding setting up FTSC to WCD (Women and child development) Ministry. The Empowered Committee of officers for the Nirbhaya Fund headed by WCD secretary Rakesh Srivastava approved the proposal.

ii.Scheme circulation: The scheme was also circulated to all concerned State Governments/ UTs administrations in September, 2019. The Union Minister of Law and Justice (MoLJ) shri Ravi Shankar Prasad wrote and appealed to all the Chief Ministers of States to open FTSCs for implementing the scheme.

iii.Cases registered: As on 31st March 2018, 1,66,882 cases were registered in High Courts (HC) for trial and disposal of cases related to rape and POCSO (The Protection of Children from Sexual Offence) act 2012.

iv.Courts for POCSO cases: Out of the 1023 FTSCs, 289 courts were proposed in 2019 to be set up exclusively for POCSO Act related cases in Districts having more than 100 such cases.

vi.Operational courts: 216 POCSO courts have already been operationalized in 12 States under the scheme.

vii.cases to be heard in a year: Each FTSC is expected to dispose of 41-42 cases in each quarter and at least 165 cases in a year.

viii.POCSO act: The Protection of Children from Sexual Offences (POCSO) Act, 2012 was enacted to provide a legal framework for the protection of children from offences of sexual assault, sexual harassment and pornography, while safeguarding the interest of the child at every stage of the judicial process.