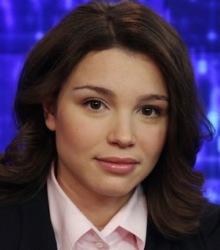 • Nemtsova received the Solidarity Prize award for advocating democracy and human rights.
• She worked as an economic journalist for the Russian TV station RBK, anchoring broadcasts and interviewing representatives from businesses and politicians.
• After her father was assassinated in February 2015, Nemtsova received threats and, fearing for her own safety, decided to emigrate. In August 2015, she began her work as a reporter in the Russian department of German public radio Deutsche Welle in Bonn.

Poland’s Solidarity Prize 2015:
• The Solidarity Prize, Polish award is given for promotion and protection of democracy and civil liberties.
• The prize has been established by the Minister of Foreign Affairs of the Republic of Poland.
• Each Laureate receives a statuette. The prize also has financial dimension 1 million EUR in total.
1 MILLION EUR-
• 250,000 EUR is the cash is for the laureate.
• 50,000 EUR is allocated to finance the laureate’s participation in the award ceremony and study visit to Poland for the laureate or a group of persons selected by him/her.
• 700 000 EUR is to be allocated to finance development cooperation projects, indicated by the laureate.