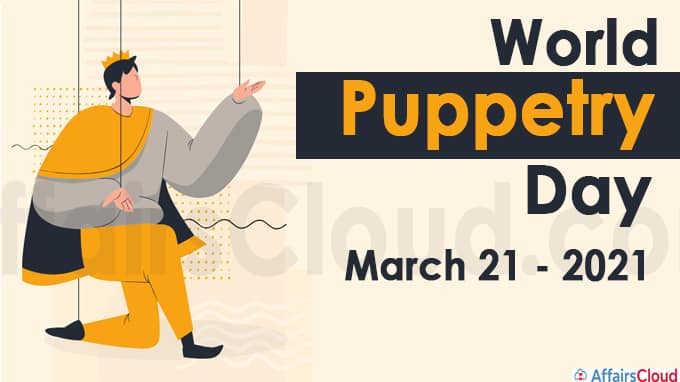 The World Puppetry Day is annually observed across the globe on 21st March to promote the puppetry arts and allows the association of the puppet actors of the same territory.

The day is celebrated across the globe through Union Internationale de la Marionnette (UNIMA)’s national centres and their members.

i.The World Puppetry Day was launched by UNIMA, a non-governmental organisation affiliated to UNESCO, in 2003.

i.Puppetry is a type of narrative theatre that includes the manipulation of puppets, the inanimate objects that resemble humans or animals.

ii.The person who manipulates the puppet is known as a puppeteer.

The puppetry is listed under UNESCO’s Representative List of the Intangible Cultural Heritage of Humanity which contains around 12 different forms of puppetry such as Rūkada Nātya(Sri Lanka), Puppetry in Slovakia and Czechia, Karagöz(Turkey), Sbek Thom(Cambodia), Opera dei Pupi(Italy) among others.