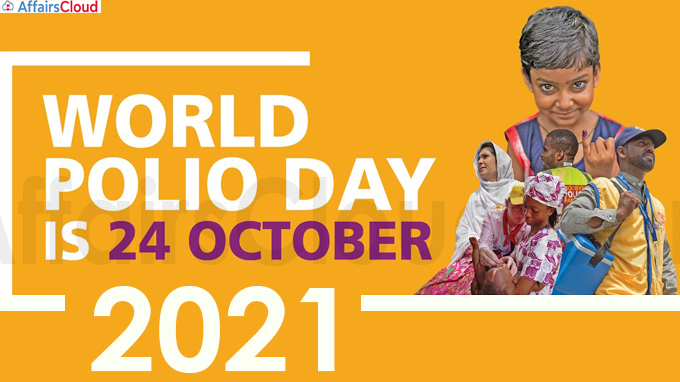 World Polio Day is annually observed across the globe on October 24th to create awareness about the importance of the efforts to eradicate poliomyelitis (polio), an infectious disease that most commonly affects children under the age of 5.

The theme of World Polio Day 2021 is “One Day. One Focus: Ending Polio – delivering on our promise of a polio-free world!”

i.Poliomyelitis is caused by a virus called poliovirus, which is transmitted from person to person through the faecal-oral route or through contaminated water or food.

ii.1 in 200 infections of poliovirus leads to irreversible paralysis; among these around 5 to 10% die when the breathing muscles become non-functional.

Polio does not have any cure, but it can be prevented through immunization.

There are two types of vaccines to prevent infection:

i.The 41st World Health Assembly(WHA), declared the commitment of the World Health Organisation(WHO) to the global eradication of poliomyelitis by the year 2000.

i.For more than 3 years the wild polio cases are reported only in 2 countries: Afghanistan and Pakistan.

WHO provided the polio-free certification to India along with the entire South-East Asia Region of WHO in 2014.