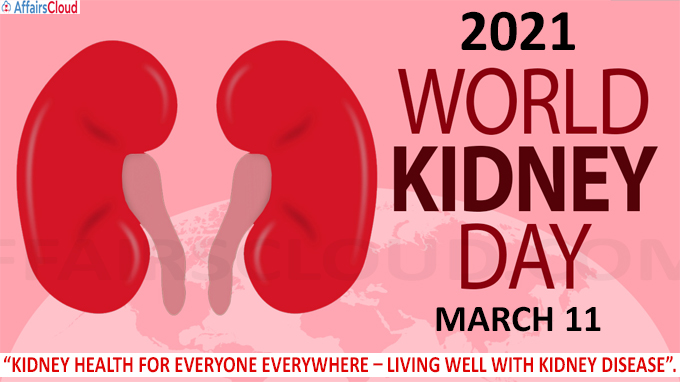 World Kidney Day is annually observed across the globe on the 2nd Thursday of March to create awareness about the functions of Kidney and to educate the importance of kidney health and reduce the impacts of kidney diseases.

The World Kidney Day Steering Committee has declared 2021 the year of “Living Well with Kidney Disease”.

The theme of World kidney Day 2021 is “Kidney Health for Everyone Everywhere – Living Well with Kidney Disease”.

ii.World Kidney Day was launched on 9th March 2006 and it was fully inaugurated on 8th March 2007.

As part of the World Kidney Day campaign this year, the #MyGr8Rule challenge – involving the 8 golden rules of kidney care.

i.Chronic Kidney Disease(CKD) is the increasing loss in kidney functions over a month or year.

ii.The loss in kidney function over a certain point is known as kidney failure.

diabetes, high blood pressure and other disorders can lead to kidney diseases.

i.Globally around 195 million women are affected by kidney diseases.

ii.It is estimated that annually around 1.7 million people die due to Acute Kidney Injury(AKI).

iii.CKD and AKI often affect the patient’s social conditions like poverty, gender discrimination, lack of education among others.

i.The Government of India rolled out the Pradhan Mantri National Dialysis Programme in 2016 as a part of the National Health Mission (NHM) to provide free dialysis service to poor people.

ii.The scheme was launched with the support of the public-private partnership(PPP) at the district hospitals.