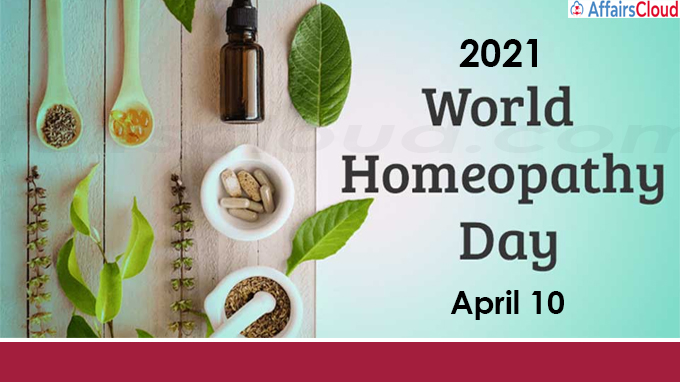 World Homeopathy or Homoeopathy Day is annually celebrated across the globe on 10th April to mark the importance of Homeopathy and its contribution to the field of medicine.

10th April 2021 marks the 266th Birth anniversary of Dr Christian Friedrich Samuel Hahnemann, a German physician and the founder of Homeopathy, He was born on 10th April 1755 in Paris, France.

To create awareness about the benefits of Homeopathic treatment and medicines.

i.The Central Council for Research in Homeopathy (CCRH) under the Ministry of AYUSH has organised a 2-day conference on the theme “Homeopathy – Roadmap for Integrative Medicine” from 10th – 11th April 2021 at VigyanBhawan, New Delhi.

ii.Shripad Yesso Naik, Minister of State for Defence, graced the inauguration events as the chief guest and launched the Homoeopathic Clinical Case Repository (HCCR) portal, a digital initiative of CCRH.

iii.CCRH also launched the Homoeopathic Clinical Case Repository, a database, aimed to compile the cases treated through homoeopath across India.

iv.TheE-Library of CCRH was launched during the inauguration of the convention and various publications of CCRH, which enhances translation of research to clinical practice and education were also released.

i.The word Homeopathy has its origin in the Greek word “Homeo” which means Similar and “pathos” which means diseases.

ii.The method of homoeopathy believes that ingredients that induce the symptoms trigger the healing system of the body.

i.To promote and strengthen the infrastructure of Homeopathic medicine in India the government created a separate portfolio known as “Ministry of AYUSH (Ayurveda, Yoga & Naturopathy, Unani, Siddha and Homoeopathy).

ii.India has recognised Homoeopathy as a medical system under the Homeopathy Central Council Act 1973.