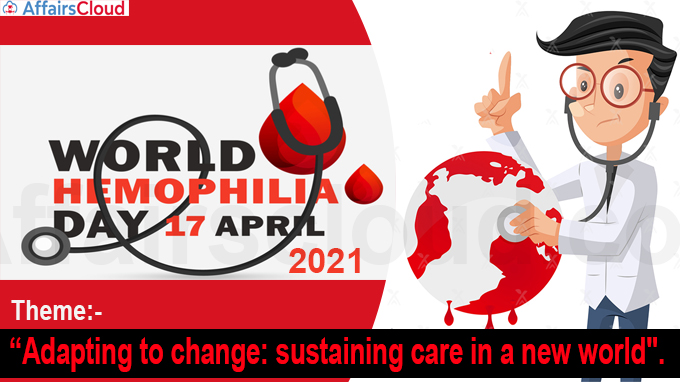 World Hemophilia Day is annually observed across the globe on 17th April to create awareness about Hemophilia and other bleeding disorders. The day is an effort to provide better diagnosis and access to care for the people with Hemophilia.

The theme of World Hemophilia Day 2021 is “Adapting to change: sustaining care in a new world”.

ii.Since 1989, the World Hemophilia Day has been globally observed by the entire bleeding disorders community to celebrate the advances in the treatment.

On World Hemophilia day, the global landmarks across the globe are lit up in red to bring focus on the people who are affected by inherited bleeding disorders.

i.Hemophilia  is a rare inherited condition where the blood does not clot due to the lack of sufficient blood clotting proteins.

ii.The people with Hemophilia bleed for a longer time than a normal person.

iii.There are two types of Hemophilia:

i.Hemophilia was first discovered during the 10th Century and was commonly found among males.

ii.During the 10th Century this disorder was known as Abulcasis.

About World Federation of Hemophilia(WFH):