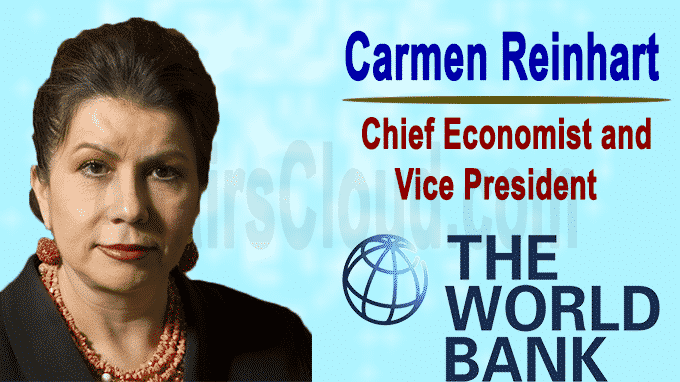 On May 21, 2020, The World Bank named former Bear Stearns executive Carmen Reinhart as its new Vice President (VP) and chief economist, tapping an expert on financial crisis who also serves on the advisory board of the New York Federal Reserve. Reinhart’s appointment is effective on June 15, 2020.

i.About Carmen Reinhart: Reinhart has a PhD (Doctor of Philosophy) from Columbia University and currently teaches international economics at the Harvard Kennedy School. She has also worked at the Peterson Institute for International Economics, International Monetary Fund (IMF) and the University of Maryland.

ii.She served as a professor at Harvard University, United States (US), has published a book entitled “This Time is Different: Eight Centuries of Financial Folly,” together with economist Kenneth Rogoff of Harvard University in 2009.

iii.Areas of expertise: She is expertise in areas including international capital flows, finance, macroeconomics, the economies of Asia and Latin America, banking and sovereign debt crises, currency crashes, and contagion.

iv.Reinhart is an adviser & contributor to ongoing World Bank debt transparency discussions and a member of a new IMF external advisory group working on policy challenges, including the coronavirus pandemic and its economic impact.

v.Earlier in her career, she worked as Vice President (VP)and chief economist at Bear Stearns Company. Reinhart has been listed among Bloomberg Markets Most Influential 50 in Finance, Foreign Policy’s Top 100 Global Thinkers, and Thomson Reuters’ The World’s Most Influential Scientific Minds.