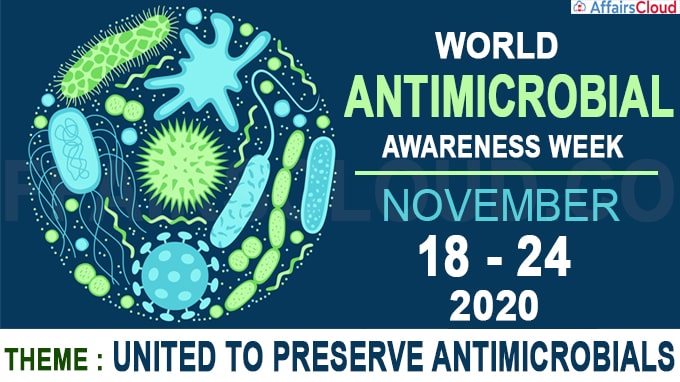 The World Antimicrobial Awareness Week(WAAW) is annually celebrated across the globe from 18th to 24th November to create and increase the awareness of global Antimicrobial Resistance (AMR) and to encourage the best practices among the general public, healthcare workers and policy makers to stop the emergence and spread of drug resistant infection.

The theme of the WAAW 2020 for the human health sector is “United to preserve antimicrobials”.

The slogan of the week long campaign of WAAW is “Handle Antimicrobials with Care”.

ii.The World Health Organization (WHO) joined this initiative in 2012 and extended it to the non-european countries and observed the World Antibiotic Awareness Week since 2015.

At the 68th World Health Assembly(WHA) held in May 2015, WHA endorsed the “Global Action Plan(GAP) on Antimicrobial Resistance(AMR)” to control the increasing problems of resistance to antibiotics and other antimicrobial medicines.

Aim of the global action plan:

To ensure the continuity of successful treatment and prevention of infectious diseases with safe and effective medicines, which are used in a responsible way and made accessible to all those who need them.

Since the adoption of GAP on AMR, the global Tripartite of the United Nations’s Food and Agriculture Organization (FAO), World Organisation for Animal Health (OIE) and the World Health Organization (WHO) are working towards increasing the awareness activities on AMR.

i.The various regional offices of WHO, International organisations and educational institutes across the globe organises webinars, seminars and other events to address the issues of AMR across the globe.

Click here to know more on the events of WAAW 2020

The antimicrobials are the key tools to combat the diseases in humans, animals and plants.

This includes the antibiotic, antivirals, antifungal and antiprotozoal medicines.

The Antimicrobial Resistance(AMR) occurs when the bacteria, viruses, fungi, and parasites resist the effects of medications, this will make it hard to treat the common infection and increase the risk of spread of disease, illness and death.