On May 22,2018, Union Minister for Water Resources, River Development and Ganga Rejuvenation Shri Nitin Gadkari inaugurated a day-long workshop on the theme “Ganga and its Biodiversity: Developing a Road Map for Habitat and Species Conservation” on river Ganga in New Delhi. This was organized by by World Wildlife Fund (WWF). 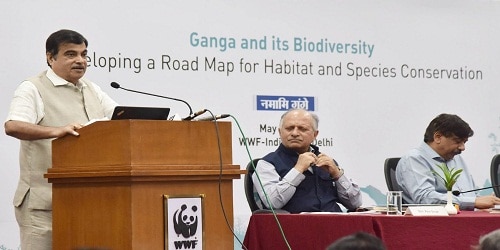 He also released a report on “Status of Conservation of Select Aquatic Species”. A database of ‘Ganga Praharis’, a self-motivated cadre, being created by Wildlife Institute of India (WII) was also launched by the Minister.

To approach the challenges of cleaning river Ganga through an integrated approach and with synergy between development and ecology.

Salient Features of the Workshop:

The Reports : “Status of conservation of selected aquatic species” & “ Ganga Biodiversity- At a glance”:

These reports have been prepared by Wildlife Institute of India (WII), Dehradun as part of the “Biodiversity Conservation and Ganga Rejuvenation” project being sponsored by National Mission for Clean Ganga (NMCG) under the aegis of the Namami Gange programme. The project aims to develop a science-based aquatic species restoration plan for Ganga by involving multiple stakeholders.

The Ganga Praharis’, a self-motivated volunteer cadre from local communities have been trained and taken on board by National Mission for Clean Ganga (NMCG) and Wildlife Institute of India (WII) to make Clean Ganga Mission a mass movement. This cadre has been created to ensure the sustainability of efforts in conservation of the biodiversity in river Ganga. So far, 427 Ganga Praharis across five main stem Ganga basin states of Uttarakhand, Uttar Pradesh, Bihar, Jharkhand and West Bengal have been involved in this project.