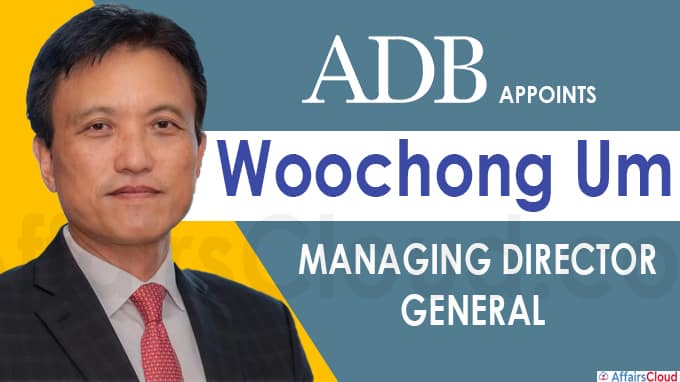 On 22nd February 2021, Woochong Um of Republic of Korea was appointed as the new Managing Director General of Asian Development Bank (ADB).  He assumed office on 22nd February and will be reporting to Masatsugu Asakawa, President of ADB.

i.He will assist the President of ADB to institute the bank wide coherence on various key initiatives and issues.

ii.He will also work on enhancing the internal and external communications of ADB across all the activities that involve: operations, knowledge, fund raising, and institutional reforms.

i.Woochong Um joined ADB in 1993 and has around 27 years of experience at ADB.

ii.He has served as the Director General of the sustainable development and climate change department of ADB and concurrently Chief Compliance Officer since June 2018.

iii.He monitored the administration of the trust funds and global fundings initiatives and served as the focal point of ADB for COVID-19 response.

On September 14, 2020 The Appointments Committee of the Cabinet (ACC) headed by Prime Minister Narendra Modi approved the appointment of Rajesh Khullar as the Executive