In a bid to prevent deaths and disabilities, Member countries of WHO (World Health Organisation) South-East Asia Region have vowed to eradicate the highly infectious childhood killers diseases of measles & rubella by 2023. 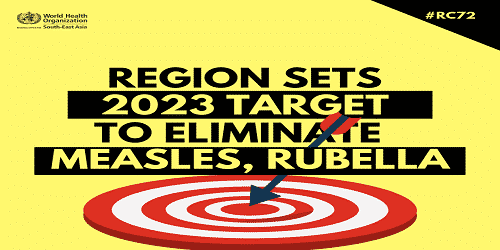 Key points:
i.Aim:  Setting the goal of elimination of both these diseases was taken during the 72nd session of the Regional Committee of southeast Asia of WHO in New Delhi.
ii. Political commitment:  Dr. Poonam Khetarpal Singh, Regional Director of South-East Asia at WHO stated that the new goal of elimination of both diseases is the political commitment of the present government, their efforts to tackle this disease and various means in this direction depends on the progress made.
iii. Successful elimination: Elimination of measles and rubella has been a priority since 2014. 5 countries have successfully eliminated measles. These include Bhutan, DPR Korea, Maldives, Sri Lanka, and Timor-Leste. On the other hand, Rubella has been taken under control by six countries Bangladesh, Bhutan, Maldives, Nepal, Sri Lanka, and Timor-Leste.
iv. Immunisation system: In order to achieve the goals, the member countries resolved to strengthen the immunisation system in their respective countries. It includes an even more active lab testing and case-based monitoring system. At the same time, the authorities will also have to be more actively prepared for the outbreak and response of these two diseases.
v. The member states adopted the “Strategic Plan for Measles and Rubella Eradication 2020-2024”, which focuses on the road map and focus areas to achieve the region’s eradication goals.
vi. Eliminating measles will prevent 500,000 deaths a year in the region. At the same time, it will promote the health and well-being of pregnant women and infants by preventing about 55,000 deaths from rubella, while eliminating rubella/ CRS(congenital rubella syndrome).

About Measles:
It is a highly infectious illness caused by the rubeola virus. It is particularly dangerous for the poor, as it attacks malnourished children and those with reduced immunity. It can cause serious complications, including blindness, encephalitis, severe diarrhoea, ear infection.

About Rubella:
It is a contagious, generally mild viral infection that occurs most often in children and young adults. It is best known by a distinctive red rash.