On September 5, 2019 the Ministry of Human Resource & Development (MHRD) awarded Institute of Eminence (IoE) status to a total of 5 institutions, and Letter of Intent (LoI) for granting the IoE to 5 private universities, based on the recommendation of the University Grants Commission(UGC). They are as follows 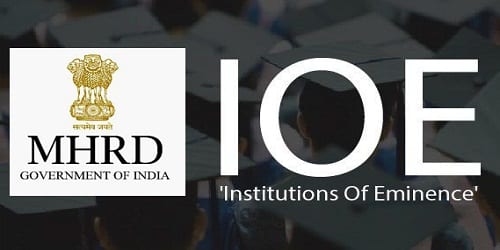 Recommended universities for IoE:
The panel recommended Shiv Nadar University in Noida,Utta Pradesh and OP Jindal University in Sonipat, Haryana for the IoE status. Similarly, West Bengal and Tamil Nadu governments were asked to indicate their commitment in contribution to Jadavpur University and Anna University respectively to enable them to have the IoE tag.

Current status:
Currently, there are 16 institutions as IoEs, apart from those 4 recommended institutions where the State Government’s confirmation and commitment is awaited.

IoE:
i. It was proposed by the MHRD in 2018 to establish world-class institutes in the country, as no Indian Universities were ranked in the 2017 World University Rankings. By this framework, 10 public and 10 private institutions would be given the status of world-class teaching institutes.
ii. The 10 public institutions granted with IoE status will be provided Rs.1000 crore each from MHRD in order to achieve world-class status.

LoI:
It means outlining general plans of an agreement between two or more parties before legal agreement finalization. The LoI is not a contract and so it cannot be legally enforced.