Prime Minister (PM) of India, Shri Narendra Modi visited Vladivostok, Russia on September 4-5, 2019. It was the first visit by an Indian Prime Minister to Far East Region of Russia. He participated as the Chief Guest at the 5th Eastern Economic Forum (EEF) for 2019 at the invitation of President of the Russian Federation Mr Vladimir Putin and also attended the 20th India-Russia Annual Summit for 2019. 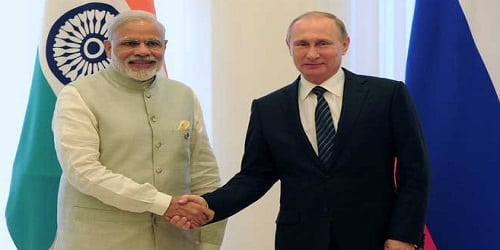 During his visit, PM recalled the visit to Russia for the India-Russia Summit of November 2001 as Gujarat chief minister as part of the then PM Late Atal Bihari Vajpayee’s delegation.

Guard of honour
PM received a guard of honour at the Vladivostok International Airport in the presence of Russia’s Deputy Foreign Minister Igor Morgulov.

List of MoUs signed
Following is the list of Memorandum of Understandings (MoUs) signed between India and Russia:

MoU to promote Trade & Investments
India and Russia have signed 30 MoUs to promote trade and investment. Among those, 16 were in the private sector and the remaining 14 in government-to-government sector.

Russia proposes joint development of submarines with India
Russia has offered India the submarines for Navy’s Project 75I on the basis of an Inter Governmental Agreement (IGA). Under Project 75(I), India plans to indigenously construct 6 submarines for the Indian Navy at a cost of over Rs 40,000 crores.

5th Eastern Economic Forum (EEF) for 2019
PM Modi presided over the 5th Eastern Economic Forum (EEF) for 2019 as the Chief Guest in Vladivostok, Russia. India has the status of a guest country at the EEF 2019. He also addressed the plenary session of 5th EEF. He stated that India and Russia are beginning a new era of cooperation in the Indo-Pacific region to make it open, free and inclusive.

Bilateral meetings on the sidelines of 5th EEF
Meeting with Japanese PM Shinzo Abe
Prime Minister Narendra Modi met his Japanese counterpart Shinzo Abe and discussed the bilateral ties shared between India and Japan.
i. Japanese PM Shinzo Abe will visit India in December 2019 for Indo-Japan Annual Summit 2019.
ii. They spoke on Regional Comprehensive Economic Partnership (RCEP), the regional cooperation agreement that is being negotiated by 16 countries including those of Association of Southeast Asian Nations (ASEAN) countries.
iii. They shared similar views on the Indo-pacific region.