Indian Test Captain Virat Kohli kept his Performance at the top helped his side into the semifinals of the World Twenty20 after defeating Australia, has replaced Aaron Finch as the number one batsman in the latest ICC T20 rankings. 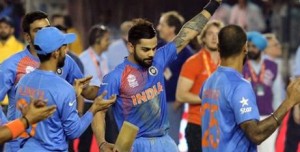