Vice President Hamid Ansari was on a five-day visit to Hungary and Algeria, where he raised the matter of cross-border terrorism and a host of other bilateral issues.

Algeria, officially the People’s Democratic Republic of Algeria, is a sovereign state in North Africa on the Mediterranean coast. Its capital and most populous city is Algiers, located in the country’s far north.

The Vice-President had wide-ranging interaction sessions with government leaders and others in both Budapest and Algiers. 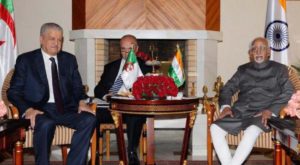 During his two-day visit to Algeria, Ansari had wide ranging discussions with Algeria’s President Abdelaziz Bouteflika, Prime Minister Abdelmalek Sellal and Foreign Minister Ramtane Lamamra and stressed on taking the India-Algeria ties to a new level and how to “rejuvenate” the bilateral relations.

Given Algeria’s substantial oil and gas and also phosphate deposits, India expects to work with the country to add significant fertilizer capacity. More than four-fifths of the land area of Algeria is covered by the Sahara Desert. Oil and gas were discovered in 1950, and then the French colonisers were forced to exit in 1962.