Renowned British statistician Sir David Cox has been awarded with the inaugural recipient of the International Prize in Statistics.

Cox was born in Birmingham. He was employed from 1944 to 1946 at the Royal Aircraft Establishment, from 1946 to 1950 at the Wool Industries Research Association in Leeds and from 1950 to 1956 worked at the Statistical Laboratory at the University of Cambridge. From 1956 to 1966 he was Reader and then Professor of Statistics at Birkbeck College, London.

About the International Prize :

The International Prize in Statistics recognizes a major achievement of an individual or team in the field of statistics and promotes understanding of the growing importance and diverse ways statistics, data analysis, probability and the understanding of uncertainty advance society, science, technology and human welfare.

Successful application of the Cox Model has led to life-changing breakthroughs with far-reaching societal effects, some of which include the following 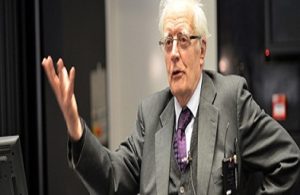 The theme for this year is “Better Data, Better Lives”. This theme emphasizes the critical role of high-quality official statistical information in analysis and informed policy decision-making in support of sustainable development.