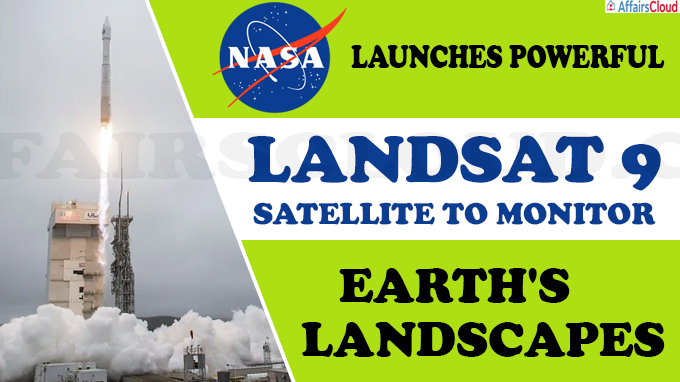 On September 27, 2021, the United States (US) satellite, Landsat 9, was launched through the United Launch Alliance (ULA) Atlas V rocket that lifted off from the foggy Vandenberg Space Force Base in California, US. It will monitor the Earth’s land surface by taking the orbital track of Landsat 7, which will be decommissioned.

What is in Landsat 9?

It is the most technologically advanced satellite of its generation as it can see more colour shades with greater depths than the previous satellites. It has two instruments aboard:

i.Operational Land Imager 2 (OLI-2): It will capture observations of the planet in visible, near infrared and shortwave-infrared light that we cannot see.OLI-2 was built by Ball Aerospace in Boulder, Colorado.

These instruments will take pictures across 185 kilometers and each pixel will represent an area of about 30 meter X 30 meter.

i.Landsat 9 will work with its predecessor, Landsat 8 that was launched in 2013. Both will take images of Earth’s surface.

What is the Landsat program?

The Landsat program was launched in 1972 and is the longest continuous record of Earth observation from space. It captures images of earth’s surface which helps in understanding land changing over decades.

NASA’s new spacecraft, named Near-Earth Asteroid Scout (NEA Scout), is one of several payloads of the Artemis I program, which is expected to be launched in November 2021. It is a miniaturized spacecraft (about the size of a big shoebox), known as a CubeSat, developed under NASA’s Advanced Exploration Systems Program.