On April 14, 2020, According to the Defense Security Cooperation Agency, the US (United States) President Donald Trump’s administration has approved the sale of Harpoon Block II air-launched anti-ship missiles & MK 54 lightweight torpedoes priced a total of $ 155 million to India to combat regional threats and increase the security of its soil. 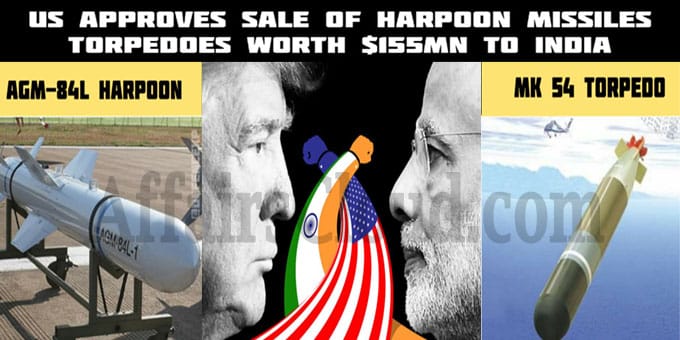 In this regard, 10 AGM-84L Harpoon Air Launched Missiles priced at $ 92 million, while 16 MK (Mark) 54 All Up Round Lightweight Torpedoes and three MK 54 Exercise Torpedoes will be given to India for $ 63 million.

i.The 3.84-metre long anti-ship Harpoon missiles manufactured by Boeing & the torpedoes supplied by Raytheon, would be integrated with India’s P-8I aircraft (also known as the “submarine killer”) to perform surface-to-surface warfare in defence of critical sea lanes while enhancing interoperability with the United States and other allied forces.

iii.This sale will be helpful in US foreign policy and national security and will strengthen the India-US strategic relationship.