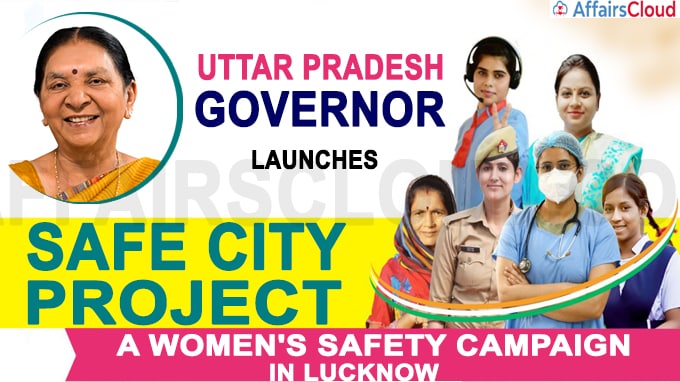 On 17th October, 2020 Uttar Pradesh (UP) Governor Anandiben Patel launched “Safe City Project” – a women’s safety campaign in Lucknow, UP. “Safe City Project” is a 180-day-long campaign under which police and other departments will work towards strengthening the security of women in public places.

The campaign will involve the movement of women police personnel to inculcate a feeling of pride and safety for women in Lucknow.

i.The UP Governor flagged off 100 pink scooters and 10 four-wheeler police vehicles as part of the campaign.

ii.The vehicles are equipped with first-aid kits, flashlights and other facilities.

iii.The project has been approved at a total cost of INR 194 Crore. The cost of the projects will be shared between the Centre and State in 60:40 ratio.

iv.Lucknow is among the eight cities to be selected for ‘Safe City Project’. The eight cities are Delhi, Kolkata, Mumbai, Chennai, Bengaluru, Hyderabad, Ahmedabad and Lucknow.

i.It is a mission mode initiative of the Ministry of Home Affairs (MHA). Its main aim of Safe City Project is to create a safe, secure and empowering environment for women in public places.

ii.Eight cities (Delhi, Kolkata, Mumbai, Chennai, Bengaluru, Hyderabad, Ahmedabad and Lucknow) have been identified for implementation of this project in the first phase.

iii.The projects will be financed under Nirbhaya Fund at a cost of INR 2919.55 Crores.

On October 17, 2020, UP Chief Minister (CM) Yogi Adityanath launched “Mission Shakti” to ensure safety and dignity of women and girls. The CM has launched it as a tribute to the woman, who died after a rape incident in Balrampur.

i.The campaign will continue for six months till Vasant Navratri in April, 2021.

ii.The mission will be implemented in two phases.

iii.If such people don’t change their ways, they will face social-boycott and their pictures will be displayed publicly.

i.On 15th August, 2020 (74th Independence Day) Prime Minister made an announcement that the centre has set up a committee under the chairmanship of Jaya Jaitley to reconsider the minimum age for marriage for women and appropriate action will be taken after a report is submitted.

ii.On March 8, 2020 President Ram Nath Kovind honoured 15 women with ‘Nari Shakti Priska’ (Women Shakti Award) for 2019 at Rashtrapati Bhawan, New Delhi. The award is conferred annually to eminent women and institutions in recognition of their service towards the cause of women empowerment & social welfare.