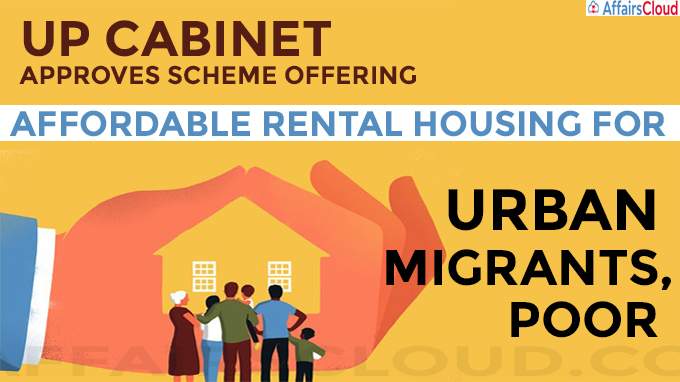 On 26th March 2021, the Cabinet of Uttar Pradesh(UP) presided over by Chief Minister Yogi Adityanath approved the Affordable Rental Housing and Complexes (ARHC) scheme,  to offer affordable rental housing for the poor people living in cities.

i.The scheme was launched by the Government of India through the Ministry of Housing and Urban Affairs(MoHUA).The scheme is launched under the ‘Self Reliant India Campaign’.

ii.ARHC will be implemented under the Pradhan Mantri Awas Yojana (Urban) to promote participation of private/public institutions for construction, operation and maintenance of rental housing complexes for urban migrants/poor.

iii.The project under this scheme will be used for rental accommodations for urban migrants, poor or low income group categories for a minimum of 25 years.

Model 2: ARHC will be built, operated and maintained by  public/private entities on their available vacant land

i.The scheme will benefit the migrants and poor labourers belonging to the economically weaker sections and low income groups like,  factory workers, educational institutions, people associated with hospitality and students.

ii.Under this scheme, preference will be given to people of Scheduled Castes, Scheduled Tribes, Other Backward Classes, widows, working women, divyang and minorities.This will be subjected to the provisions made by the state government.

On February 15, 2020, Uttar Pradesh (UP) Chief Minister (CM) Yogi Adityanath launched ‘UP Mukhyamantri Abhyudaya Yojana 2021’. Under the scheme, Free-of-cost coaching centres will be established across the state, through which students can prepare for competitive exams like IAS, PCS, NDS, CDS, NEET & JEE.