India hosted the three-day(August 29-31,2016) Eighth meeting of SAARCSTAT and delegates from SAARC Member States and other international organizations viz., FAO, PARIS 21, and ADB attended the Meet.

The theme of this Meeting is “Trade Statistics – Merchandise & Services”.

The South Asian region is richly endowed in terms of human resources and has to its credit several internationally renowned statisticians. P.C. Mahalanobis, the founder of Indian Statistical Institute was one of them who visualized, in early 40’s, Statistics as the “Key Technology of the era”.

i.The Statistics Ministry in India attaches considerable importance to coverage and quality aspects of statistics released in the country and are constantly working to achieve international standards.

ii.This was stated by the Minister for Statistics and Programme Implementation, Shri. D.V. Sadananda Gowda, while inaugurating the 8th Meeting of Heads of SAARC Statistical Organizations (SAARCSTAT). 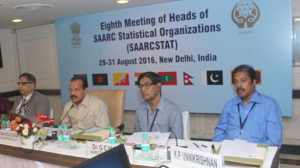 iii.He also stated that Accurate, reliable and timely information plays an important role for effective decision making in almost every aspect of human endeavor.  It is an essential ingredient for decisions makers and Policy planners.

iv.Reducing Asymmetry in Trade data amongst SAARC countries is one of the topics for discussion in this Meeting.  Reducing asymmetry in bilateral trade data is an issue which requires serious attention from the data compilers.

v.Although India has taken up the issues of data reconciliation with a few countries like China, Brazil, Vietnam, Philippines, South Korea, Japan, South Africa, Sri Lanka but much more needs to be done to bring down the asymmetry to an acceptable level especially in the SAARC Region.

It is essential to put into

It is noted that the policy initiatives for comparable statistics and smooth & efficient transit and transport facilities, which will provide an opportunity to the SAARC Members countries to review the implementation of the recommendations made in International Merchandise Trade Statistics (IMTS) 2010 and Manual on Statistics of International Trade in Services (MSITS) 2010.