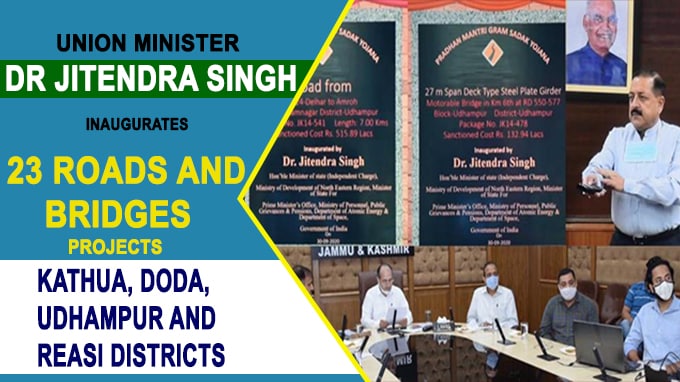 i.These 23 projects include 15 roads which are built under the Pradhan Mantri Gram Sadak Yojana (PMGSY) for all weather connectivity and 8 bridges to provide better connectivity to the people.

ii.The projects of 111 kilometers(km) will benefit around 35000 people of the jammu region.

iii.The highest railway bridge in the world of height 359 meters (35 meters taller than the Eiffel tower of Paris, France) is being constructed above the Chenab river in the Reasi District.

i.Union Minister of State Jitendra Singh urged the officials to work within the timeline and speed up the acquisition of land and forest clearance on the basis of priority to enable a seamless development works.

ii.Prioritising the needs of the people, he insisted to dedicate the completed projects to the people without formal inauguration.

iii.He also assured that the government is committed to complete all the development projects which were started in the past 6 years.

ii.On July 9, 2020, Defence Minister Rajnath Singh inaugurated six strategic bridges in the border areas close to the International Border (IB) and Line of Control (LoC) in Jammu and Kashmir (J&K) through video conferencing from New Delhi. These were built in a record time by the Project Sampark of Border Road Organisation (BRO).