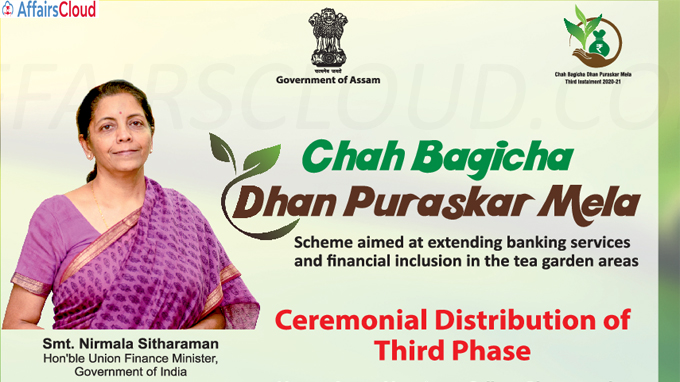 ii.The government of Assam distributed a financial assistance of Rs.3000 to around 7.5 lakh people of the tea garden areas.

The Chah Bagicha Dhan Puraskar scheme was launched by the Government of Assam in 2017-2018.

To bring the tea labours closer to the banking sector and promote cashless transactions.

i.Around 6.3 lakh beneficiaries were provided financial assistance of Rs.2500 in their bank accounts as a part of the first phase of the Chah Bagicha Dhan Puraskar Mela 2017-2018.

ii.In the 2nd phase of the scheme in 2018-2019, another Rs.2500 was credited to the accounts of around 7.15 lakh accounts, which were uninterruptedly operated for 6 months,

In the Union Budget presented in February 2021, Presented by the Finance Minister, Rs.1000 crore was announced for the welfare of the tea workers of Assam and West Bengal.

On 4th September 2020, The Government of Assam relaunched its old scheme Swami Vivekananda Assam Youth Empowerment (SVAYEM) worth Rs.1000 crore. The scheme is aimed to provide self-employment opportunities to more than 2 lakh youths of the state.