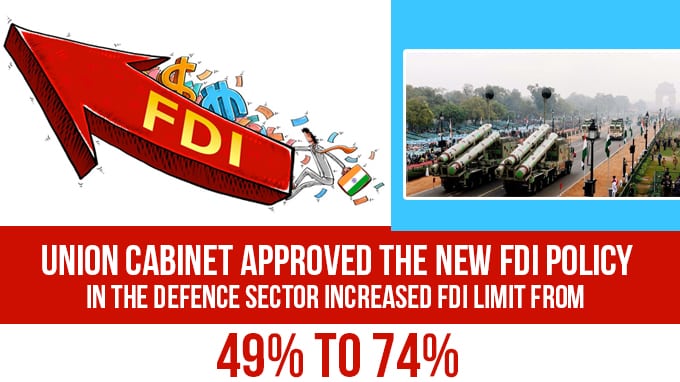 On September 08, 2020, the Union Cabinet led by Prime Minister Narendra Modi approved the new Foreign Direct Investment (FDI) policy in Defence Sector, thereby allowing FDI through automatic approval to be increased from 49% to 74%.

i.The new policy has a ‘National Security’ clause as a condition, wherein any Foreign Investment in Defence Sector shall be subject to scrutiny on grounds of National Security.

ii.The Government also reserves the right to review Foreign Investment in the Defence Sector which will affect the national security.

iii.The Clause has been suggested by the Ministry of Commerce and Industry due to sensitivity of the defence sector.

i.It has been introduced to reduce the dependency on imports in the Defence Sector and boosting “Make in India”.

ii.“Make in India” will generate more employment and business opportunities to Indian Businesses and boosts self-dependency.

Increasing Turnover in Defence Sector by 2025:

ii.In 2019, The defence sector along with the aerospace and shipbuilding industry was estimated to be worth Rs 80, 000 crores, out of which private investment was just 20% (around 17, 000 crore). The investment of Public Sector Undertaking was 80% (around 63, 000 crore).

The increase of FDI cap to 74% in Defence Sector was announced by Finance Minister Nirmala Sitharaman while announcing the economic stimulus package in May, 2020.

The Government also put out a list of weapons and platforms which will be purchased only from domestic industries.