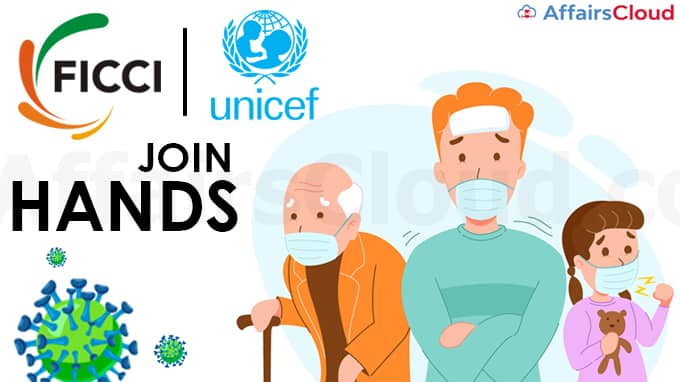 On July 13, 2020, United Nations Children’s Fund (UNICEF) India joined hands with Federation of Indian Chambers of Commerce and Industry’s (FICCI) Socio Economic Development Foundation (SEDF) to initiate UNICEF’s “#Reimagine Campaign” for the support of most vulnerable populations and children during the ongoing COVID-19 response and its aftermath in India.  Their action plan will be based on the document that is being developed jointly by the International Chamber of Commerce (ICC) and UNICEF for governments and businesses on the measures they can take to support the post-pandemic recovery.

-FICCI-Socio Economic Development Foundation (SEDF) will reach out to its membership base to garner support for the campaign and leverage its resources like cash and core assets to mobilise funds.

-The partnership will also help to avoid potential long-term damage to business operations and employment pipelines, and their most important resource, their personnel, their children and their families.

In response to the COVID-19 pandemic, UNICEF has launched Reimagine – an urgent appeal to governments, the public, donors and the private sector to support UNICEF’s efforts to respond, recover and reimagine a world severely impacted by COVID-19.

– In India, CHILDLINE 1098 responded to a total of 460,000 calls in 21 days, of which 20 % resulted in interventions for preventing child abuse, trafficking, child marriage and child labour.

-According to the newly published study by Johns Hopkins Bloomberg School of Public Health in the Lancet Global Health Journal, due to reductions in routine health service coverage levels, disruption in live saving immunization activities and an increase in child wasting, in next six months up to 300,000 children could die in India alone.