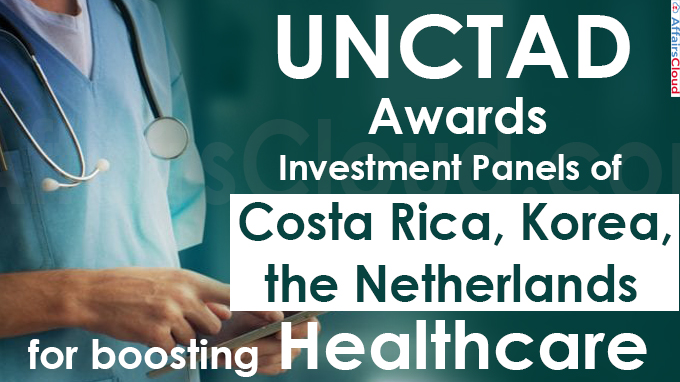 On 19 October 2021, the United Nations Conference on Trade and Development (UNCTAD) awarded the ‘United Nations Investment Promotion Awards’ to investment promotion agencies (IPAs) from Costa Rica, the Netherlands, and the Republic of Korea for excellence in promoting investment in health sectors.

i.Costa Rica: The Costa Rican Investment Promotion Agency (CINDE) received the award for its contribution in health and related sectors (in online and social media presence), which gives visibility to case studies and news on investments in the health sector.

ii.The Republic of Korea: Invest Korea was recognized for the wide-ranging coverage of the health sector on its virtual outreach channels, including online tools, incentives and databases on potential partners.

iii.Netherlands: Invest in Holland Network was awarded for its online investment promotion activities showcasing the Netherlands as a connected, life-sciences metropolis, and presenting information on the country’s enabling environment for investment in health.

iv.Special Award for the blue economy: It was given to the Mauritius Economic Development Board and the Seychelles Investment Bureau for their work towards promoting investment in the blue economy.