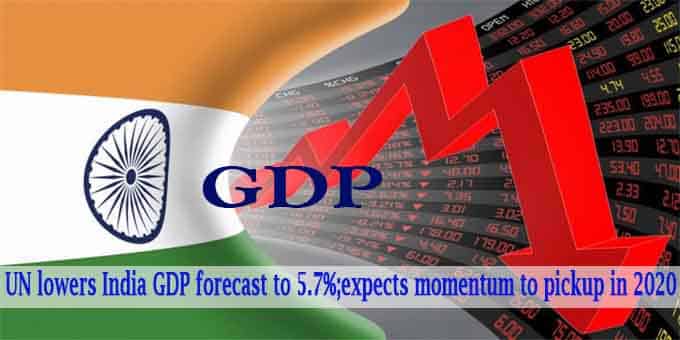 ii.3 major reasons for the reduction in GDP growth

Auto Industry: In 2019, this sector saw the slowdown., whereby the vehicle sales volume witnessed the fastest decline in 19 years. The auto industry records for 7% of the India’s GDP and 49% of the manufacturing GDP.

NBFCs: One of the main reasons for the decline in GDP growth is the cash crisis of non-banking finance companies (NBFCs). The crisis came in September 2018 after the Indian infrastructure development and finance company,Infrastructure Leasing & Financial Services Limited (IL&FS) defaulted in debt payments.

iv.Global growth:The report stated that, due to the long trade dispute in 2019, the world economy grew by 2.3%, which is the lowest in 10 years. It is also projected to grow at a rate of 2.5% in 2020. In the coming times, business stress, financial ups or geopolitical tensions may affect recovery.

v.2 ways to accelerate growth:
(i) India, which is going through an economic downturn, needs to continue with structural reforms & (ii) Financial incentives and financial sector reforms are needed to increase investment and consumption.