UN organized first-ever summit on movement of 65.3 million refugees and migrants. Global leaders gathered for the first of two high-profile days of meetings on the issues of migration and refugees at the U.N. headquarters in New York. This meeting attempted to forge a global response to the plight of the 65.3 million people forcibly displaced worldwide.

About Refugee and Migrants:

A refugee is a displaced person who has been forced to cross national boundaries and who cannot return home safely. Such a person may be called an asylum seeker until granted refugee status by the contracting state or the UNHCR if they formally make a claim for asylum.

The meet seeks to standardize responses to refugee situations and provide better education and jobs to refugees. It also encourages resettlement and includes plans for a campaign to combat xenophobia. 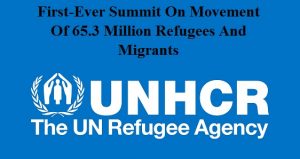 Leaders from 193 countries adopted a “breakthrough” declaration to save lives of over 65 million refugees and migrants and share responsibility as the world grapples with the unprecedented refugee crisis.

Objective:  To save lives of over 65 million refugees and migrants and share responsibility as the world grapples with the unprecedented refugee crisis.

By adopting the declaration, Member States are making bold commitments including:

A new campaign called ‘Together – Respect, Safety and Dignity for All’ to ‘respond to rising xenophobia and turn fear into hope’ launched by UN Secretary-General Ban Ki-moon