Singer-actress Jennifer Lopez has been named the first-ever global advocate for girls and women at the United Nations Foundation.

ROLE AS GLOBAL ADVOCATE FOR GIRLS AND WOMEN 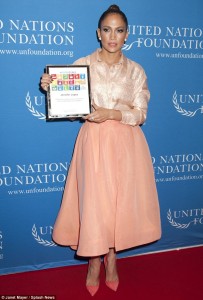 A Golden Globe and Grammy Award nominated entertainer and entrepreneur, Lopez comes into the well-being of women and children through the Lopez Family Foundation that she and her sister Lynda Lopez started in 2010. Their foundation is committed to increasing quality health care and health education for women and children and first began working with the UN Foundation in 2013 around the Global Moms Relay.

ABOUT THE UNITED NATIONS FOUNDATION