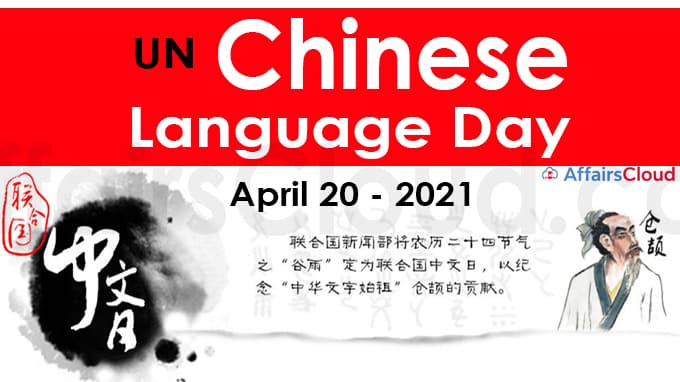 The United Nations(UN)’s Chinese Language Day is annually observed across the globe on 20th April to celebrate the contribution of Chinese literature, poetry and language to the world’s culture.

i.The first UN Chinese Day was celebrated on 12th November 2010 and later it was changed to April 20 from 2011 onwards.

April 20th was chosen from the Guyu, the 6th of 24 solar terms in the traditional east Asian calendars, which pays tribute to Cangjie.

ii.The events are focused on 3 types of pictographs associated with 3 cultures and 3 UNESCO World Heritage sites.

i.The UN language day celebrates multilingualism and cultural diversity and to promote the equal use of all the 6 official languages(Arabic, Chinese, English, French, Russian and Spanish) of the UN.

ii.The UN celebrates 6 separate language days, each dedicated to one of the 6 official languages of the organisation.