On January 20, 2020, According to a new study by experts from University Maritime Advisory Services (UMAS), London, England, which includes University College London’s (UCL) Energy Institute & the Energy Transitions Commission,the  shipping industry must spend a scale of investment of at least $1 trillion (£0.8 trillion) on new fuel technology to decarbonise the international shipping if it is to meet UN emissions targets by 2050. 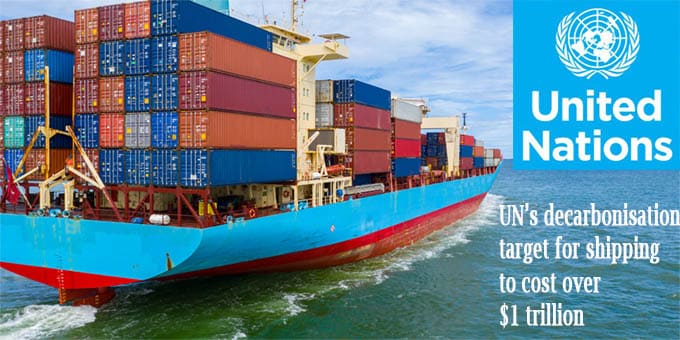 i.Since about 90% of world trade is done by sea, Global shipping is responsible for around 2.2 % of the world’s CO2 (carbon dioxide) emissions.

ii.United Nations (UN) specialized shipping agency, the International Maritime Organization (IMO),has set itself the target of reducing carbon emissions by 50 % by the year 2050.

iii.If shipping field was to fully decarbonise by 2050, an additional investments of around $400 bn will need in over 20 years period, bringing the total investments from $1.4 to 1.9 trillion.

v.Suggestion: The new study suggests biggest share of investment is required in the land-based infrastructure & production facilities for low carbon fuels, which will inturn made roughly around 87% of the total. This includes investments in the low carbon fuels production, and storage based on land and bunkering (the supplying of fuel for use by ships) infrastructure needed for their delivery.
The balance 13% of the investments required are based on the ships themselves, which include the machinery and on board storage required for a ship to run on low carbon fuels in newbuilds and, in some cases, for retrofits.

vi.About the study: UMAS estimated these figure using data derived from its shipping model GloTraM (Global Transport Model) ,which is a tool used for analysing future scenarios of the shipping industry, to estimate, amongst other metrics, the CO2 emissions from shipping.
The study was carried out on behalf of the non-profit organization ‘Getting to Zero Coalition’, which includes the Global Maritime Forum (GMF) and World Economic Forum (WEF), which is meeting in Davos,Switzerland.