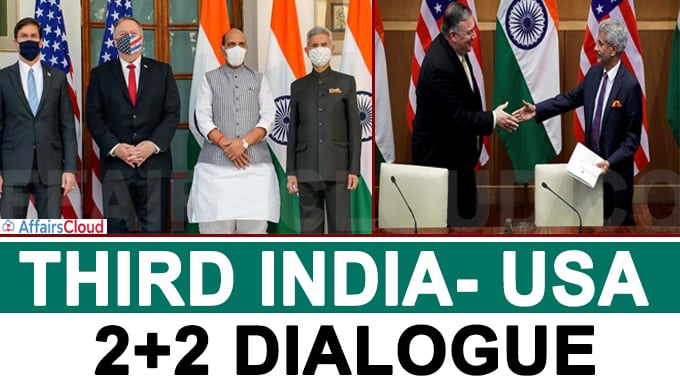 On October 27, 2020, India hosted the third India-United States (US) 2+2 Ministerial Dialogue in New Delhi where India side was represented by Raksha Mantri (Defence Minister) Rajnath Singh and External Affairs Minister Dr. Subrahmanyam Jaishankar and the US side was represented by Secretary of State Michael Richard Pompeo also known as Mike Pompeo and Secretary of Defense Mark Thomas Esper. The agenda for this covered all bilateral, regional and global issues of mutual interest.

A joint statement has been launched covering the following key information of 3rd India-US 2+2 Ministerial Dialogue:

During the dialogue India-US inked five agreements which are as follows:

MoU on Technical Cooperation in Earth Observations and Earth Sciences

The MoU for Technical Cooperation in Earth Observation and Earth Sciences was signed between the U.S. National Oceanic and Atmospheric Administration and the Indian Ministry of Earth Sciences for developing a better understanding of regional and global weather origins in the Indian Ocean and advancing common research goals in meteorology, oceanography, and management of living marine resources.

Both nations agreed for the extension of the MoU between the US Government and the Government of India concerning cooperation with India’s Global Centre for Nuclear Energy Partnership (GCNEP).

A Letter of Intent (LoI) was also signed between the Office of Cancer Complementary and Alternative Medicine,National Cancer Institute, National Institutes of Health, U.S. Department of Health and Human Services and the Indian Central Council for Research in Ayurvedic Sciences, Ministry of AYUSH for cooperation in the field of Ayurveda and Cancer Research.

–ISRO-NASA satellite NISAR scheduled to be launched by 2022

Under the ongoing collaboration between the National Aeronautics and Space Administration (NASA) and Indian Space Research Organization (ISRO), the NASA-ISRO Synthetic Aperture Radar (NISAR) satellite is scheduled to be launched by 2022.

–India, US vow to deepen cooperation in jointly combating COVID-19

India and the US vowed to deepen collaboration in combating COVID-19 by strengthening cooperation in the development of vaccines, diagnostics, ventilators and other essential medical equipment.

Mike Pompeo and Mark Esper met Prime Minister (PM) Narendra Modi after the third 2+2 ministerial dialogue between the two countries in Delhi. The Secretaries briefed the PM on their bilateral conveyed the U.S. Government’s continued interest in building stronger relations with India and working together to realize the shared vision and goals.

Defence Minister Rajnath Singh holds talks with his US counterpart