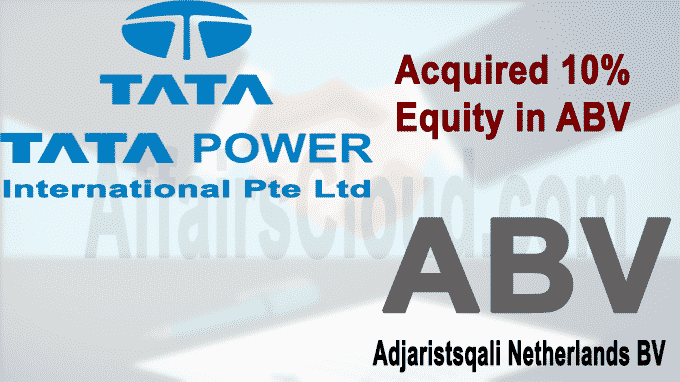 On May 20, 2020 Tata Power announced that its subsidiary Tata Power International Pte Ltd(TPIPL) has acquired a 10% stake in Adjaristsqali Netherlands BV(ABV) from the International Finance Corporation(IFC) for USD 150,000 (about Rs 1.13 crore). The increase in stake has increased TPIPL’s shareholding in ABV to 50%.

i.The agreement is signed among TPIPL, ABV, and the IFC. The acquisition is done  as per the provisions of the shareholder agreement.

ii.ABV owns 100% stake in Adjaristsqali Georgia Limited Liability Company-LLC (AGL), which has developed a 187-megawatt (MW) hydro project in Georgia at a cost of around USD 500 million(Rs 37.5 billion). As of March 2020 it has commissioned 178 Mega Watt(MW) of the total capacity.

iii.Tata Power has  announced that its wholly-owned subsidiary Khopoli completed the sale of the company’s entire stake in  Cennergi Private Limited to Exxaro Resources Limited for ZAR 1,550 million (~USD 84.25 million) and normal working capital and other adjustments in April 2020.

About Tata Power:
Tata Power is one of India’s largest integrated power companies, and together with its subsidiaries, has a total installed capacity of 10,763 MW.
Registered Office– Mumbai, Maharashtra
CEO & Managing Director– Praveer Sinha

About ABV:
It is a subsidiary of Clean Energy Invest, a Norwegian hydro-power generating company. The company builds, owns, and operates hydro projects on the Adjaristsqali River and its tributaries in Adjara in Georgia.
Headquarters– Amsterdam, Netherlands
Chairman– Kyrre Olaf Johansen