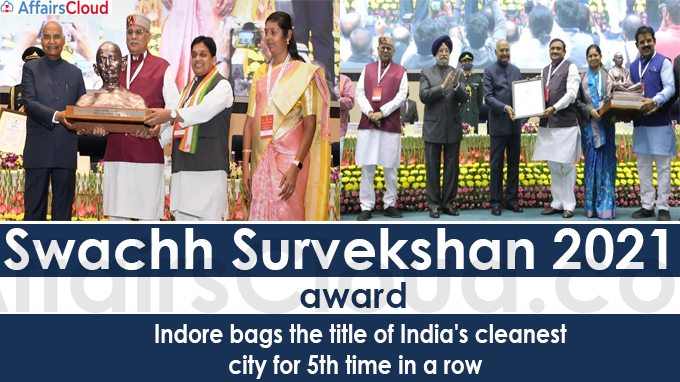 In November 2021, the President of India, Ram Nath Kovind, felicitated the awardees of the cleanest cities of India at the ‘Swachh Amrit Mahotsav’ hosted as part of Swachh Bharat Mission-Urban 2.0 (SBM-U 2.0) by the Ministry of Housing & Urban Affairs (MoHUA) at Vigyan Bhavan, New Delhi.

i.For the 5th consecutive year, Indore, Madhya Pradesh (MP), was awarded the title of India’s Cleanest City under SS 2021, while Surat, Gujarat and Vijayawada,  Andhra Pradesh, bagged the 2nd and 3rd spots respectively in the ‘more than 1 lakh population’ category .

ii.Vita, Lonavala, and Sasvad, cities from Maharashtra, bagged the 1st, 2nd, and 3rd positions respectively in India’s cleanest cities under the ‘less than 1 lakh population’ category.

iii.In SS 2021, Maharashtra bagged the highest number of awards i.e. a total of 92 awards, followed by Chhattisgarh with 67 awards.

Note – One city has been given only one Award. The city’s population is as per the 2011 Census.

ii.SS 2021 has also helped identify over 6,000 innovations and best practices in sanitation and waste management from across urban India.

iv.A song titled ‘Har Dhadkan Swachh Bharat Ki – Reaffirming a Nation’s Commitment to Swachh Bharat Mission-Urban 2.0’ was released by the President, to represent the commitment of all citizens, especially the children, youth and senior citizens, in the Swachhata journey.

vii.Indore, Navi Mumbai, Nellore and Dewas emerged as the top performers, across different population categories among 246 participating cities in the Safaimitra Suraksha Challenge, launched in 2020 by MoHUA.

Prahlad Singh Patel, Minister of State(MoS), Ministry of Jal Shakti presided over the virtual launch of Swachh Survekshan Grameen(SSG) 2021 under Swachh Bharat Mission (Grameen) (SBM(G)) Phase- II during the event organised by the Department of Drinking Water and Sanitation (DDWS).

i.Swachh Survekshan is an annual survey of cleanliness, hygiene and sanitation in cities and towns across India.

ii.It was launched as part of the Swachh Bharat Abhiyan, which aimed to make India clean and free of open defecation by 2nd October 2019.

iii.The 1st survey was undertaken in 2016 and covered 73 cities, by 2020 the survey had grown to cover 4242 cities and was said to be the largest cleanliness survey in the world.