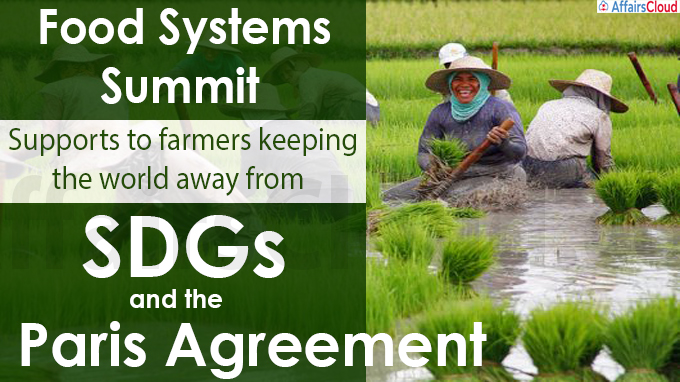 To inform the countries about the negative side of agro funding which is keeping the world away from achieving Sustainable Development Goals (SDGs), therefore, an alarming need to reform the agriculture support systems.

How supporting to farmers is affecting the well-being and environment?

i.The contemporary food production system emits high greenhouse gas (GHG) and the support is being provided for the most emission-intensive sectors like sugar and the beef production chain.

iii.The support and incentives are targeted at a few commodities thus not benefiting all farmers.  Also, they incentivise production practices and behaviours that might be harmful to the health, sustainability, equity and efficiency of food systems.

i.It should be noted that annually $540 billion are used as a support to farmers which would be increased to triple by 2030 to $1.759 trillion.

ii.Of the total support, $294 billion was paid in the form of price incentives and around $245 billion as fiscal subsidies to farmers.

iii.Only $110 billion was used to support infrastructure, research and development and benefitted the general food and agriculture sector.

What report said as a solution?

i.The report called to repurpose the support, denying its negative implications, as most of the support is in emission-intensive and environment unfriendly sectors.

ii.High-income countries should decrease their support to the meat and dairy industry that accounted for 14.5% of global GHG emissions.

iii.For low income countries, the support to chemical pesticides and fertilizers should be trimmed and also to discourage monoculture (cultivation of a single crop in a given area).

Six-step recommendation by Report to the Governments for repurposing process: