Special Economic Zones (SEZs) is a geographical region that has economic laws different from a country’s typical economic laws. Here different economic laws mean hassle free laws where companies can enjoy various benefits for running their business like tax free imports, etc.
These SEZs are located within a country’s national borders usually near border so that trade is easy from these point.

India was one of the first in Asia to recognize the effectiveness of the Export Processing Zone (EPZ) model in promoting exports, with Asia’s first EPZ set up in Kandla, Gujarat in 1965. Inorder to overcome the absence of world-class infrastructure, unstable fiscal regime, etc  the Special Economic Zones (SEZs) Policy was announced in April 2000 in India.

Who can set up these SEZs in India?

Prior approval is required from the respective state governments for setting up SEZ. The states satisfy themselves that they are in a position to supply basic inputs like water, electricity, etc. After this, the proposals are sent to the ministry of commerce and industry by the state government. 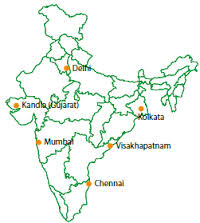 What benefits do these zones provide to businesses in India?

But why are these SEZs allowed, if government has to give so many benefits to the businesses in these areas?
The primary motive is to attract the Foreign Investment (FDI) in the country. This can be explained by an example:
The Government needs funds for its various activities, to establish the required infrastructure and for this it will require the funds. The funds can be collected as investments from both national as well as foreign companies. So, SEZs are allowed. On the one hand the companies will get the various benefits of the hassle free laws; thereby increasing their revenue generating capacity as they can produce and trade goods at a lower price. On the other hand, the Government will get the funds needed or the investments for the economic growth. So this provides a win-win situation for both.

The main objectives of the SEZ Act 2005 in India are:

Some other facts about SEZs:

With so many advantages of the SEZs, there are its drawbacks too:
The biggest drawback is the taking up of the arable land from farmers to set up these zones. As the arable land would be taken, there will be low crop production which is not a good sign for Indian economy where the large part of its GDP is dependent on agriculture.

In the latest budget 2016-17:
In case of a SEZ unit, it is proposed that if a unit commences its operations on or before 31st March 2020, it shall be eligible to claim income tax benefit under section 10AA of the Income Tax Act. Whereas, the developers of SEZs, which are not operational yet, have been given time up to 31st March 2017 to make their SEZs operational to avail income-tax benefits under section 80-IAB of the Income Tax Act.
This means that after 31st March 2020, all the companies operating in India will have to pay tax.