However, it is a basket of currencies, but is not treated as a currency. 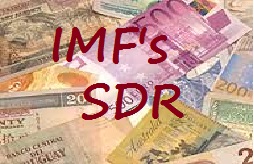 Why was it created?

When countries were to do imports and exports, they had to face restrictions in world trade and financial development. The two main assets that were used internationally were gold and US Dollar. But they were found to be inadequate when the world started expanding and international trade grew. Then IMF decided to create a new international reserve asset.

When SDRs are used?

Some facts about SDR: