As part of mission CRS-22, SpaceX’s Dragon Capsule was launched aboard the Falcon 9 Rocket from Florida, USA. The Capsule contained supplies for the International Space Station (ISS) scientific instruments  such as new high-tech solar panels and living organisms such as Squids & a microorganism called Tardigrades. 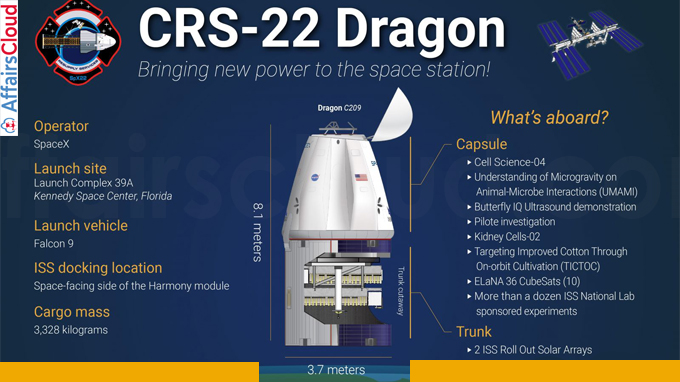 i.The Solar panels delivered in the mission are the 1st of the 3 sets of high-powered modern panels which will help in meeting the needs of ISS.

ii.The capsule contains 20, 000 Tardigrades or water bears which are capable of surviving harsh conditions. It is part of the experiment to understand how these microorganisms survive & reproduce in space and microgravity.

iii.Young specimens of the species Euprymna Scolopes (also called as Bobtail Squids) have been sent to the scientists to study the effect of zero gravity on interactions between Bacteria and their host organisms.

iv.The animals will be monitored for kidney stones, any issues related to digestive and immune systems.

v.The results from this experiment will provide insights into keeping astronauts healthy and safe in space.

On May 4, 2021, SpaceX launched another batch of 60 Starlink Internet satellites into Orbit from NASA’s Kennedy Space Center in Florida, USA. The satellites were launched aboard the Falcon 9 Rocket.