The term “shadow bank” was coined by economist Paul McCulley in 2007.

A shadow banking system is the term used for the non-banking financial companies (NBFCs) which perform similar roles as commercial banks but are not under any control. It is the term prevalent more in advanced countries. 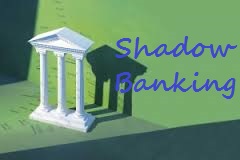 If we talk about India, NBFCs (Non Banking Financial Companies) can be regarded as the Shadow Banks. But they are not actually shadow banks because NBFCs in India are under the regulation of RBI.

The shadow banking sector plays an important role in promoting financial inclusion. The main advantages of shadow banks lie in their ability to reduce transaction costs, their quick decision making ability, and customer orientation and prompt delivery of services. But there is also a risk in shadow banking practice in any economy because they can take their own decisions.

Though shadow banks do not exists here in India, still, the risk related to the excessive risk taking and failure probabilities of these institutions may create systemic crisis in India as well. That is why the RBI is implementing measures to control all financial institutions including the NBFCs to have a strong control over the sector.