On September 27, 2019 Geologists under the principal researcher Douwe van Hinsbergen, Professor at Utrecht University, Netherlands, have discovered a new continent named “Greater Adria” in the mediterranean region under Europe, after successful analysation of mountain ranges from Spain to Iran in detail for 10 years. The discovery of this continent is published in the journal ‘Gondwana Research’. 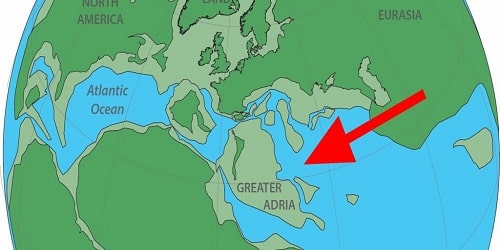 Key points
i. Greater Adria: This Greater Adria island is a piece of continental crust in the size of Greenland. It once separated from North Africa and plunged into the Earth’s mantle under Southern Europe. It took Greater Adria 120 million years to be found by mankind. The only remaining part of this continent is a strip that runs from Turin, Italy via the Adriatic Sea in the Italian peninsula, hence the name “Greater Adria”.
ii. Background: Millions of years ago, the Earth was consisted of just one massive chunk of land called Pangea, which fragmented into smaller portions and led to the rise to continents. Pangea had broken down into Gondwana and Laurasia. The former fragmented further to give birth to Europe, North America, and Asia, while the latter birthed Antarctica, South America, Africa, and Australia. During this process, the lost eighth continent Greater Adria slipped underneath what now forms Southern Europe.  Although it is considered as a part of Gondwana.
iii. Reconstruction: Reconstructing the lost Greater Adria was difficult as the Mediterranean region remains the most complex region on earth geologically. Plate tectonics, the theory that explains continents and oceans formation states that various plates of the earth do not internally deform when they move with respect to each other along large fault zones, is defied in case of the Mediterranean region.

About Mediteranean region:
♦ This region is also called as Mediterranean Basin or Mediterranea.
♦ This region covers three continents. They are Europe, Asia, and Africa.
♦ It has a varied and contrasting topography comprising of high mountains, rocky shores, impenetrable scrub, semi-arid steppes, coastal wetlands, sandy beaches and a myriad island. Most areas in the Mediterranean basin are hilly.